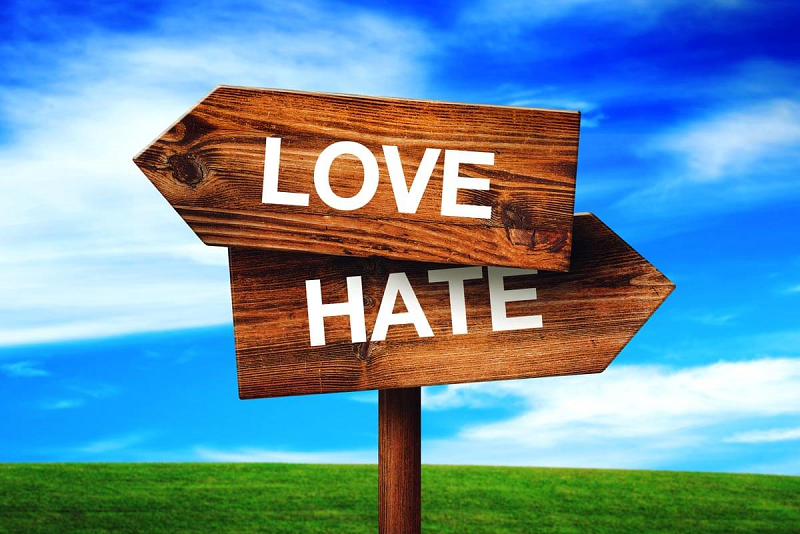 August 06, 2022 (GSN) - I wish to begin with a troubling childhood memory, which is a sort of parable on the bridge between love and hate. Life in Ethiopia used to represent a shared rather than isolated existence.

The gates and walls did not prevent you from watching the life of neighbors, and vice versa. The lives I saw were dominant expressions of a love bond, but they were accompanied by unintelligible moments of sadism. I am speaking of husbands beating wives out of ‘love’ or of jealous lovers becoming nemeses. This sadistic tendency was typical of authoritative teachers who thrash students – ‘educating’ them! Equally incomprehensible was the friendship or alliance formed out of mutual hatred and competition with ‘others. The unwritten law runs: my neighbor is my friend whom I must defend against kids from other neighborhoods.

I never understood how you can inflict pain on those you claim to love. Nor did I ever comprehend how you and I declare our love through the hatred we harbor towards others. This childhood dilemma has reentered my life and intensified as a national question of fealty. In the political arena, there is a rhetorical subtext, which is openly uttered by the crowd-pleasing citizens. On one side, there are those who expect you to hate and despise not only TPLF but also the people of Tigray. If you don’t, you face the suspicious gaze and risk the label ‘junta’ affiliate or whatever is a trendy term. If you don’t, you hate your country. On the other side, there are those who expect you to condemn and renounce not just Prosperity Party (PP) and its affiliates but also all of Oromia or the rest of the nation. If you don’t, you hate Tigray. This is an empty and truncated demand, which perpetually exists when we dignify it with an answer. Thus, I refuse to play this game as I had refused similar ethnic demands in the past.

This confusion of love and hate is not a novel movement. There are those who view Ethiopia as the enemy of Oromia or those who champion being Amhara or another ethnicity at the expense of Ethiopia. Personally, I refuse to form a hatred-alliance as an expression of my love and loyalty. Above all, I know this is a false dichotomy, commonly expressed as: You are either with us or against us! Well, I respond to such a tricky question by saying: I am generally for human fellowship. As to my national alliance, I firmly defend a united Ethiopia, which is formed and wrought by every member but never with exceptions. I will defend my position, but let me first elucidate this illusory bridge of love and hate.

There are various routes we take to blur the line between love and hate, while collective or group identity seems to define all. Initially, we use discrimination for creating animosity and separation. We then indiscriminately love the in-group and indiscriminately hate the out-group. The separation between the in/out-group can be historical and biological when we use nature, birth accidents, or shared suffering and victory to form our identity and discriminate against the rest. It can also be intentional or semi-rational when profession, class, religion, or ideology is used to both incorporate and disenfranchise.

In every case, there is bound to be an overlap and confusion in ‘we’ and ‘them’; ironically, our solution is willful ignorance. For instance, we willfully ignore our religious identity when we take an ethnic position. Returning to the pressing issue, I have to willfully ignore the inseparable existence of Tigray (any other ethnicity) and Ethiopia when I speak of love for one and hatred for the other. The moment I form, in creative ignorance, the in/our groups through discrimination, I change tactics, beginning to indiscriminately love the in-group and indiscriminately hate the out-group. When you speak of loving your country or ethnicity while doing the very things that threaten our unity, we can no longer belong to the same creed.

Holistic hatred, just like holistic love, is the exception in autonomous individuals but the rule in the crowd. The individual maintains the freedom to change, while the crowd maintains obedience to a cliché or mantra of empty rhetoric: the enemy of my enemy is my friend. This is, I think, a morally bankrupt statement employed by crowd-pleasers to trick the faint-hearted. We may have a common enemy, but that doesn’t translate into love. Expressed differently, you and I need to have a common understanding of compassion, respect, empathy, and justice to even begin the journey of love. Concretely expressed, just because I demand fairness, equality, and justice for the people of Tigray, don’t expect me to defend TPLF or seek separation from the rest of the country. On the other hand, just because I stand with you in the fight against the TPLF, don’t expect me to ignore the humanitarian crises or crimes committed on innocent people of Tigray, or accept an Ethiopia without Tigray. Simply put, I utterly love my country that I support neither; I don’t confuse hatred with love.

I think mob mentality has dominated the public sphere and we can put a halt to it by accessing the free individuality that resides in us all. Finding comfort in conformity while dreading autonomy, leads to silencing the inner voice – the internal philosopher that is in love with truth. Fearing the wrath of our fellow mob, we betray ourselves. Tracy Chapman sings in, ‘Less than Strangers’ how the departure of lovers creates a rift, making them more estranged than are even strangers. This is a conscious act of suppressing cherished memories of the past, tarnishing them by echoing past trifles, or using hatred to overcome love ad infinitum. We are currently engaged in collective hatred, and we call it love.

If we are to overcome our collective madness, we each must reexamine our values through reflection. Take a minute to observe yourself. If only for a moment, detach yourself from your whims and passions. If your love and hatred can stand your suspicious gaze and your inner inspections, you can reclaim them. However, if such reflections make you discover that your love is just disguised hatred, you must save yourself by abandoning your collective passions.

At the risk of sounding like a preacher, I say we must hate our own blind hatred instead of people. If you must kill, kill your venomous passions. And if you must love, love humans but never institutions. Do not seek solace in the crowd; its ephemeral shelter is available for the submissive but never for the strong-willed. For crowds and their leaders, you are valued as a member; as numbers that constitute obedient followers. Above all, don’t be afraid to take a personal stand. Just like your smiles and cries, your love and hate must be your own. Love is not the antithesis of hatred. Love is an expression of real essences and values, and so form an alliance with those who seek truth and unity, those who love justice and equality.

Abel Merawi is Addis Ababa-based contributor for Ezega.com. He can be reached through this form.