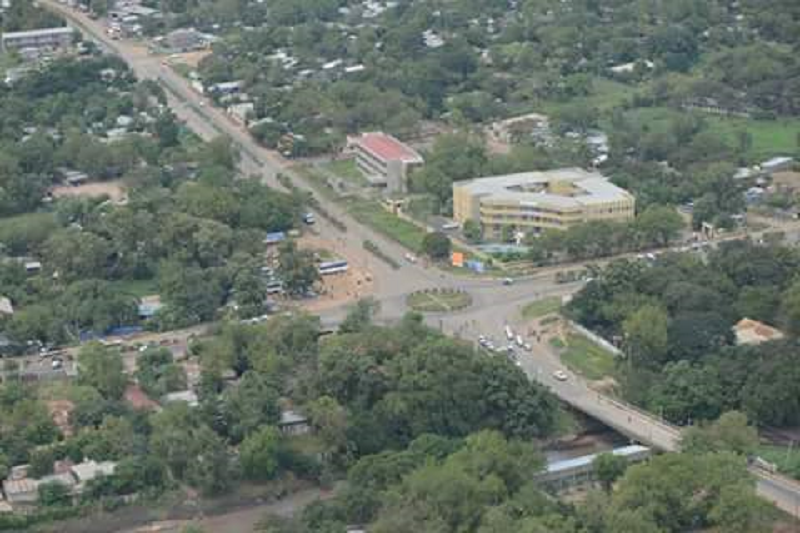 Gambella, October 13, 2016 (GMN) - Its dwellers and other frequent visitors witness that Gambella town is growing day by day. Road networks are relatively increasing, In fact, the most abundant mode of transportation, Chinese-made Bajaj, has a hard time moving, particularly on the pavement in front of the town's post office.

Part of the paved road has been turned into a wide hole. Similar damages on the roads are common in most places, persuading you to question the existence of pertinent bodies to mend them. Full-grown palm trees, lining up by the roadsides, have graced the town. Lime in most of the towns of Ethiopia, Gambella's roads are comfortable for cycling. The roads are clean. In most busy places, you can see several huge billboards installed adjacent to the roads, targeted to bring an attitudinal change towards the use of condoms and male circumcision, which otherwise are considered taboo by the local people. Various types of research have shown that sexual transmission of HIV from female to male is reduced by up to 60 percent if the male partner is circumcised.

The town enjoys twenty-four-hour electricity and as a result, streetlights are available on major roads. Meanwhile, it is sad to hear town residents talking about water shortage in the town. In fact, it reminds me of the Amharic proverb Ye'abbyin lej wuha temaw literally meaning the 'son of Blue Nile is thirsty'. This is a typical example showing the fact that poverty in Ethiopia is unjustified. Look, River Baro roaming free cutting the town into two. Gilo and Alwero are not far from the town and underground water is also available. But the town residents have been hit by a shortage of water. As they say, in Ethiopia every resource is around us, but we have not fully tapped into it and that is why poverty here is unjustified. Some hotels and guest houses are also unable to get water. In the guest house where my friends and I booked, we were provided with a twenty-five-liter jerrycan of water per day collected from Openo/Baro River. All my colleagues refused to wash their bodies with it. I washed my body with the water, actually, nothing has happened to me till now. Most local people use Openo/Baro River for bathing. For a new visitor, it is not advisable to either swim or washes in River Baro, because there are dangerous crocodiles. The locals can easily identify the presence of crocodiles around. They say the upper layer of the water forms a V-shape when the crocodiles swim to hunt prey and they leave the river immediately. Anyone can enjoy watching the naked youngsters swimming and taking bath in the River leaning on the iron bars of the second largest bridge in Ethiopia stretched over Openo/Baro River. You can have a free bath, men and women take a bath side by side, both naked. Here you can vividly realize taboo is a relative term. Other infrastructural facilities like telecommunications, banks, and the like are available. But, the town administrators need to think of interconnecting the town with more road networks as well as mending the existing ones.

In the pick hot hours from ten in the morning to three in the evening, you may feel as if the heat is taking all the body fluids out of your body and you will be soaked in sweat. Every living of the land remains quiet during this time. But it is rather advisable and enjoyable to sit outdoors. And adjusting wearing style to fit this temperature will obviously help to stay cool in such hours of the day. In case you set out to visit this beautiful part of Ethiopia, never pack thick cotton or woolen clothes, just very light clothes and sandals. It is common to see people there half naked, above their waist. Kids play even up to ten at night being all naked, when the temperature is as high as forty. You can never imagine of sleeping under a blanket and sheet or in a sleeping bag, it is enough to spread a mosquito net and sleep on the mattress putting fans and ventilators on. Most people take cold beer or water to cool themselves. From the perspective of use value the former is preferable, I think. If you buy cold water, never leave it alone, just take it all as quickly as possible otherwise in less than a quarter of an hour it gets hot and you will throw it away.

Unlike in other places of Ethiopia, people in Gambella go to work only until four and five during the morning and in the afternoon after three PM. The government declares this working hour of the hottest seasons, quite often in May.

Food-centric views of the town

While in Gambella, never hesitate to dine fresh fish almost for free. You can get it in many forms-raw, toasted, or in the form of soup. Toasted fish is served with corn porridge and salt, if you go to Abobo town you will be served fish at lunchtime. In Gambella town, however, the famous restaurant-next to the town's telecommunication office- serves you delicious fish only after four in the afternoon. You have never tested the combination of these foods elsewhere, fish with porridge. If you have the courage it is common to eat fish raw, with hot staffs called kochkocha. Another prominent food is called Afagn, may be the hottest foodstuff in the hottest region. It is made from meat and hot spices. The locals say Afagn makes malaria stay away from you. There are people who could not endure the hotness and sometimes become unconscious for some minutes. In short, it just burns you alive. In case you suffer from severe gastric pain, it is highly advisable not to try it. There are also various local drinks, made from honey. But it is rare to find it in the markets. If you are interested to check it, ask the youngsters to take you to their weekly feasts. It is a kind of party, that the youngsters contribute money and host in one of their friend's homes. They call it 'a free day'. There is a reason why they call it that way. During the feasting day, parents and other members of a family other than the youngsters are made to leave their home. The feast starts mostly in the morning of Saturdays and goes until the next day. Local alcoholic drinks like Acheta and Ugul, brewed from honey and other ingredients color the feast. In Gambella taking alcohol like katikala is only for the old people; youngsters do not taste it. The youngsters intoxicate themselves with the alcohol and dance tuning to loud famous African music. And it is common to make love without condoms. The youngsters say that having sex with condoms is like eating bananas unpeeled, and that is one of the major factors contributing to a high prevalence rate of HIV in the region. Sexual relations are casual therefore start and end at the same place. And, the local drinks are limited to such places.

Commercial sex is very common. The region's HIV Prevention and Control Office said they even tried to take some commercial sex workers to prison as a means to lessen their numbers but they (officials) later realized that such an act is against human rights.

Some youngsters who have lived in the town for a long time told me that, Gambella is the final destination of 'mobile sex workers. They work in the many towns found along the way to Gambella including Jimma, Metu, Gore, and arrive in Gambella. Prostitution has therefore spread to the region because of such movement of the people. You can find as many of the teenagers in Zembaba Hotel-Young and beautiful girls, not older than eighteen dressed up to attract men. Don't worry about libel, Zenbaba is not a real hotel, it is a nickname for the street corners where commercial sex workers take a shield from the palm trees. They are paid a minimum of fifty and a maximum of two hundred birr in return for their service.

Free Zone - a gangrene for the town

If the youngsters may not like to give a party, they prefer to go out to the nightclubs in the town. There are various clubs in the town. But the grand one is ‘Free Zone. Do not expect a standard dance floor, light, and so on. It is a wide warehouse full of youngsters up to its neck. The Disc Jockey plays hot African music and male and female youngsters, not older than seventeen, perform their sexy dances taking countless bottles of beer, and finally... A Series of questions flood your mind as you see these youngsters. How do they get money? Do their parents know their whereabouts? What does the regional administration do about this? According to a source who told me about the nightclub, some of the girls in the club are commercial sex workers, but most of the youngsters are school girls and boys who come to chill out. The source also witnessed that sex without a condom and with multi partners is common there.

A night with amateur paints

If you have decided to enjoy the night, please go to Andnet hotel, it serves you not only food and drinks but a display of paints on every wall of the hotel. And please read one of the famous humor of Mesfin Habtemariam's Ye'bunabet sealoch. At one corner you can see a biker zebra riding to escape from a lion but unluckily it could not escape from the lion-it looks like the lion is saying “late alone your legs motorbike cannot rescue you”. On another corner is displayed a fairy naked lady with more than six wings dipping in a river but, it is hard to interpret this painting. When you gaze at the other corner, you will see a 'stilt walking' lion coming close to a giraffe, maybe to kiss her on the lips. The paints are amateur works. But, if you are lonely they help you not to feel it. There is a lot more to visit in Gambella, but our while ended and we flew back to Addis.