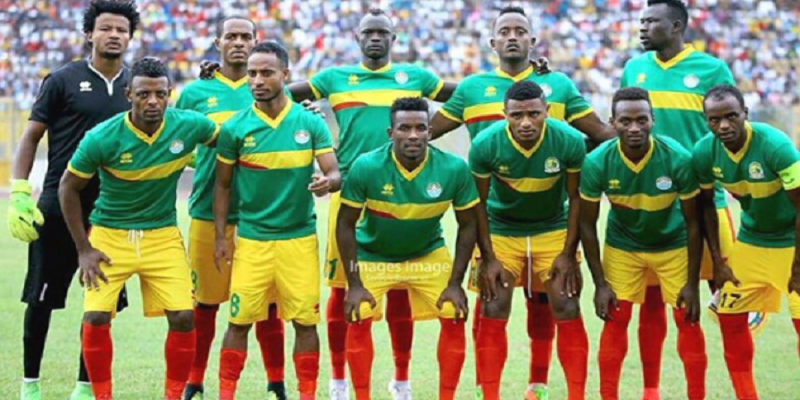 Calgary, Canada, November 15, 2013 (GSN) - Gambella’s own super star Omod Okori arrived in Nigeria on Thursday afternoon with his team players ahead of Saturday for the second leg of the 2014 FIFA World Cup playoff against Nigeria.

The young football star from the Gambella region is currently playing in the Ethiopian premier league for Defence Force FC, a powerful striker with a rocket left foot, blazing speed and an eye for goals.

Omod said he is in good spirit physically and mentally ready to play."Playing for the national team is a huge affair, representing over 82 million people on the football field is no easy task. And I am very happy and honour to be here."  Omod added.

Meanwhile, in Gambella town, prime-time TV sets for fans are ready to be aired and watched on satellite TV across the region and zones. Gambella community at home and in Diaspora is very excited watching their own boy play for the 2014 FIFA World Cup playoff qualification and wish him very well for best of luck for his future success.

Meantime, Ethiopia coach Sewnet Bishaw will not be dropping any players ahead of the crucial game against Nigeria on Saturday.

Sewnet will have a travelling party of 30 players as he reiterated it would be good to give all of them the exposure and to let them get the experience ahead of next year’s Chan to be held in South Africa.

Among the players travelling will be six foreign-based players including the 24 home-based players. According to Fifa rules, federations are required to submit 23 players but the Ethiopian Football Federation (EFF) has decided to allow all players to travel and foot the remaining bills.

The year-old discussed Saturday’s game extensively and spoke of his respect for the African champions. “Nigeria is the African champion and deserves our respect. They won the first leg at our ground so we know we must win to go to the World Cup. We want to go to Brazil,” he said.

The Ethiopians who arrived at the Magareth Ekpo airport on Thursday afternoon then checked into the Channel view Hotel in Calabar.

Ethiopia must score at least twice to qualify for the World Cup in Brazil next year and Bishaw believes the task is achievable.

“Nigeria is very strong at home but in football, anything can happen. We will give it our best and see what happens,” he said. Ethiopia has only beaten Nigeria once in eight meetings at senior level.