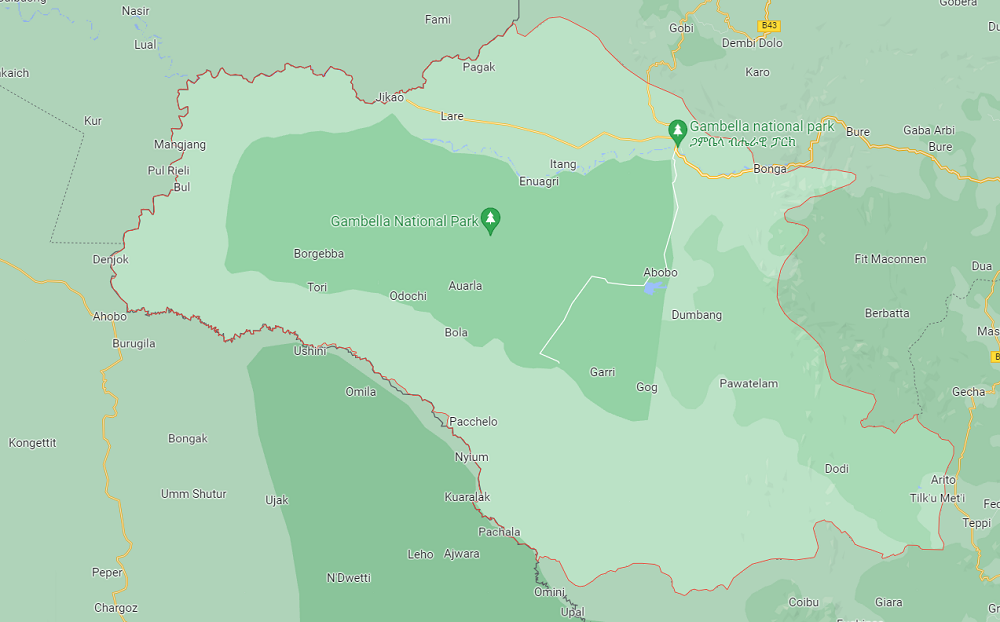 November 16, 2014 (GMN) - The small town of Gambella is an oddity among Ethiopian towns and a most appealing one. Lying at an altitude of 450m in the swampy, mosquito-ridden lowlands, Gambella exudes an atmosphere of tropical languor, dictated as much by its lush vegetation and almost unbearable humidity as by its remoteness from just about everywhere. Historically, ethnically and scenically, Gambella is barely a part of Ethiopia at all.

Two main ethnic groups live in Gambella - the Anywaa, who are strikingly tall and very dark-skinned for Ethiopians, and the Nuer, who are smaller but even more dark-skinned. Gambella is a lovely place and the people are utterly charming.

How to get there

By bus, there are two routes you can take. If you are coming from Addis, you can travel to Jimma and then onto Gambella via Matu. If you are looping through the west, the most obvious route from Nekemte to Gambella is through Gimbi and Dembidolo, which will take two or three days. If this route is impassable due to heavy rain you can get a bus from Nekemte to Bedele and there you should be able to find transport on to Matu the same day.

Where to stay and eat

The government Ethiopia Hotel is set in attractive rambling grounds on the bank of the Baro/Openo River. Self-contained double rooms cost around US$ 16. The restaurant serves reasonable meals for just over US$ 1. Of the private hotels, you can try the Opena Hotel, opposite the bus station, where a clean self-contained room with nets costs US$ 2.50 What to see and do Gambella offers little in the way of organized sightseeing and its remoteness does not make it a prime target for mass tourism. The area is, however, rich in wildlife and the layout of the town is such that just strolling around you can see plenty of birds and monkeys. It is worth devoting some time to the bridge over the Openo/Baro (ask permission to take photographs) and, to its west, the shady avenue that follows the river's course - one of Gambella's few apparent British relics. Other places of interest are the ruined Italian fort and surrounding swamp, and the isolated hill about 1 km north of the town center. In the market, you can buy the woven baskets and bubble pipes that are characteristic of the area. However, Gambella's real attraction is its singular and absorbing sense of place and its wonderfully evocative atmosphere. There is a tourist office in the government buildings north of the town center.

Where to go from Gambella

Gambella is virtually the end of the road as far as public transport is concerned. You could take a plane out to Addis Ababa, or you can take a bus to Jimma, the largest town in western Ethiopia. The town seems extraordinarily cosmopolitan and, although Jimma lacks any notable tourist attractions, you couldn't hope for a friendlier, greener, or better-equipped place to rest up between bus trips. For those with private transport, Gambella is the potential springboard for two remote expeditions. The first would take you south to Abobo and Gog through the heart of the remote Gambella National park, a swampy reserve that is famed for its population of Nile lechwe. Even backpackers could do this trip as you may be able to get some kind of public transport as far as Gog. A second option would be to follow the seasonal road that runs west from Gambella along the course of the Baro River, eventually reaching the Sudanese border at Jika. The road takes you through an area inhabited by Anywaa fishermen and Nuer pastoralists whose lifestyles are virtually untouched by Western influences. The area is also rich in birds, crocodiles, and water and forest mammals such as hippos and various monkeys. If you are thinking about exploring these areas you should be entirely self-sufficient. It would also be sensible to ask around Gambella about road conditions and the current security situation in this intermittently volatile Sudanese border region. The tourist office, the Ethiopia Hotel, or the police station would be good places to start.